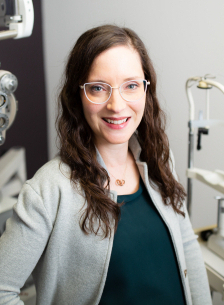 Dr. Rebecca Chippior graduated from the University of Waterloo School of Optometry on the Dean's Honours List following the completion of her Honours BSc degree in Biomedical Science. Dr. Chippior had a passion for eye care since high school and has worked in a number of eye care settings as a university student in the Ottawa Valley and in Waterloo, ON. In her externship year she participated in a volunteer eye care mission in Mexico, trained in a primary care setting in a private practice in Boston, MA and completed an ocular disease rotation in Mobile, AL. In school she was very involved in extracurricular activities including being President of the University of Waterloo Optometry Student Society. Upon graduation she received the Canadian Association of Optometrists Award of Merit (awarded in recognition of professionalism and effective leadership in student organizations) and was elected valedictorian of her class.

Dr. Chippior is certified to prescribe ocular therapeutics and is a member of the Ontario Association of Optometrists. Dr. Chippior has been working at St. Lawrence Optometry since 2009 and took over ownership in 2013 from her parents-in-law Drs. Paul & Sharon McCreery. The following year St. Lawrence Optometry East opened its doors. In fall 2017 Dr. Chippior was awarded the Medium Business of the Year award by the Greater Kingston Chamber of Commerce.

Dr. Chippior enjoys participating in the professional development of future Optometrists. She has participated in question writing for the Canadian Examiners in Optometry, was a private practice guest speaker for aspiring Optometrists, and has mentored many students and Optometry interns over the years.

Having grown up in the Ottawa Valley she now considers Kingston home. Her favourite local businesses are Flavours of India and Glenburnie Grocery. In her downtime, Dr. Chippior enjoys gardening, yoga, traveling and spending quality time with her three daughters and husband Jonathan.