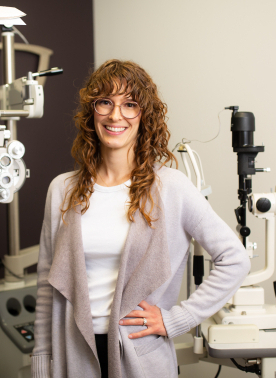 Dr. Samantha Chapman graduated from the University of Waterloo School of Optometry on the Dean’s Honour List, after having completed her Bachelor of Science in Neuroscience from McGill University. As part of her training, she completed several externships, including one in Pinellas Park, Florida, where she worked with retinal, cataract, and oculoplastic specialists. She also completed primary care externships in Orangeville and Mississauga. Dr. Chapman was the president of the Canadian Association of Optometry Students (CAOS) and an active member of the student Lion’s Club at the University of Waterloo. She was an executive of the student Volunteer Optometric Services for Humanity (VOSH) chapter and participated in a vision care mission trip in Mioveni, Romania. Originally from Swift Current, SK where her father and grandfather are both optometrists, Dr. Chapman is happy to have settled in Kingston with her husband Justin. Her favourite local restaurants are Tango Nuevo and Woodenheads and she loves frames by Etnia Barcelona and Ray-Ban. In her spare time, she enjoys playing the flute, swimming, curling, cheering on the Blue Jays, and traveling to any new location, near or far. Dr. Chapman is expecting her second child in spring 2021 and will return to seeing patients later this year.