Our exceptional, friendly staff is our greatest asset. They are excited about what they do and they care personally about getting the best results for our patients.

Our staff will try to accommodate your busy schedule by finding appointments that suit your needs. 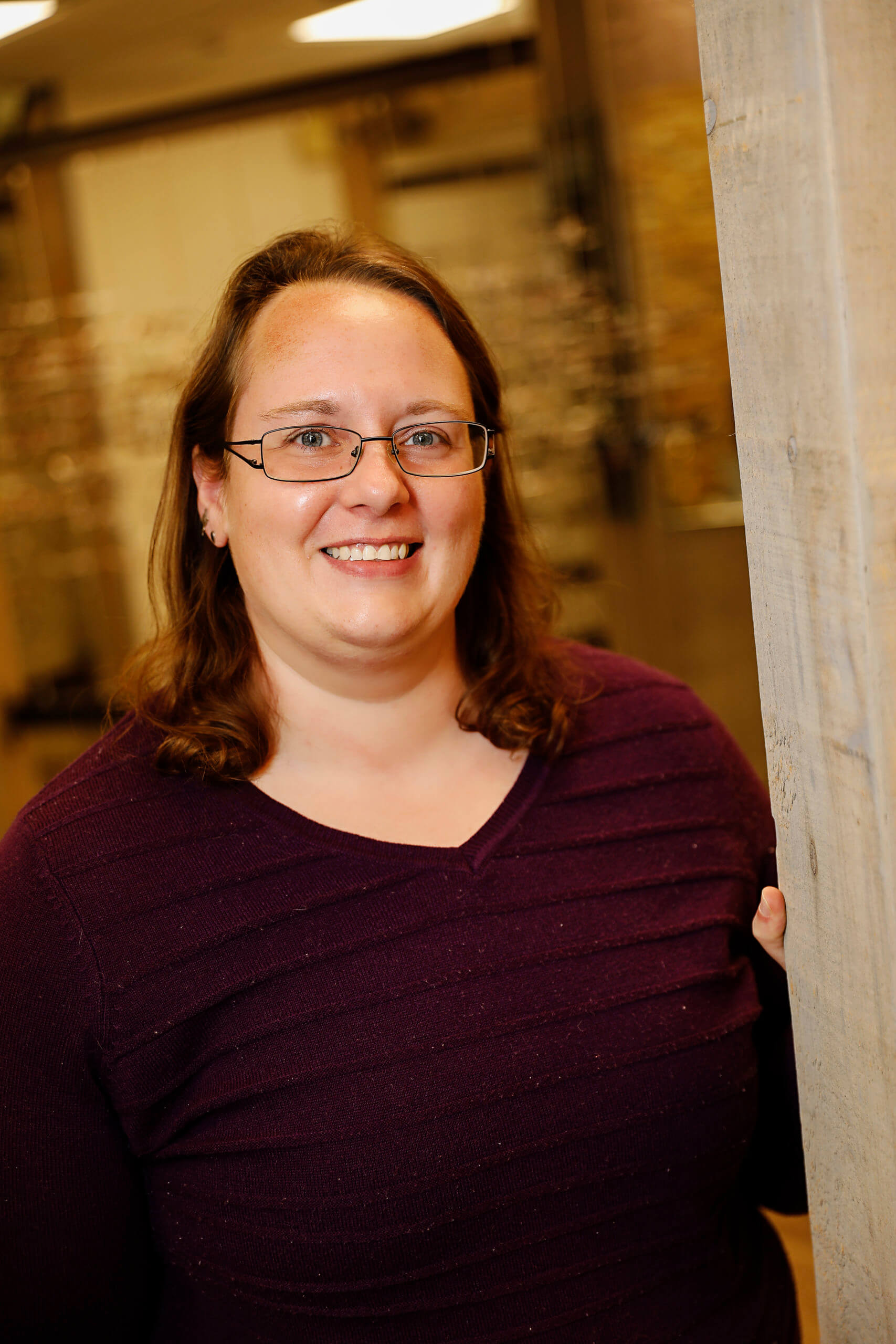 Annetta is originally from Kingston. She trained as an Orthotic Technician at George Brown College and worked in the field for 10 years. Her hands-on abilities make her a great addition to our lab staff. Annetta's hobbies include woodcarving, art, and playing board games. Her favourite local business is Improbable Escapes. 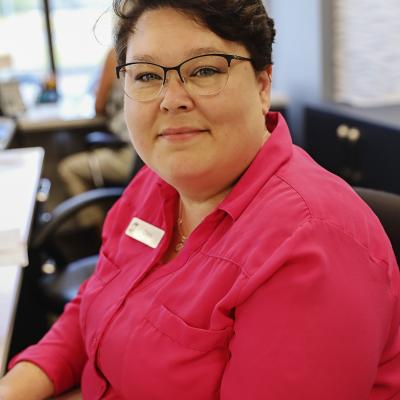 Chris started working at St. Lawrence Optometry over 10 years ago. She is a local, having grown up in Elginburg. She wears many "hats" but you will see her mainly working at our front desk or conducting diagnostic testing for our patients. She enjoys reading and cooking in her spare time. Chris is proud mother of her son Logan and sis married to Mark. She loves Golden Rooster in downtown Kingston. Her favourite frame brand we carry is Etnia Barcelona. 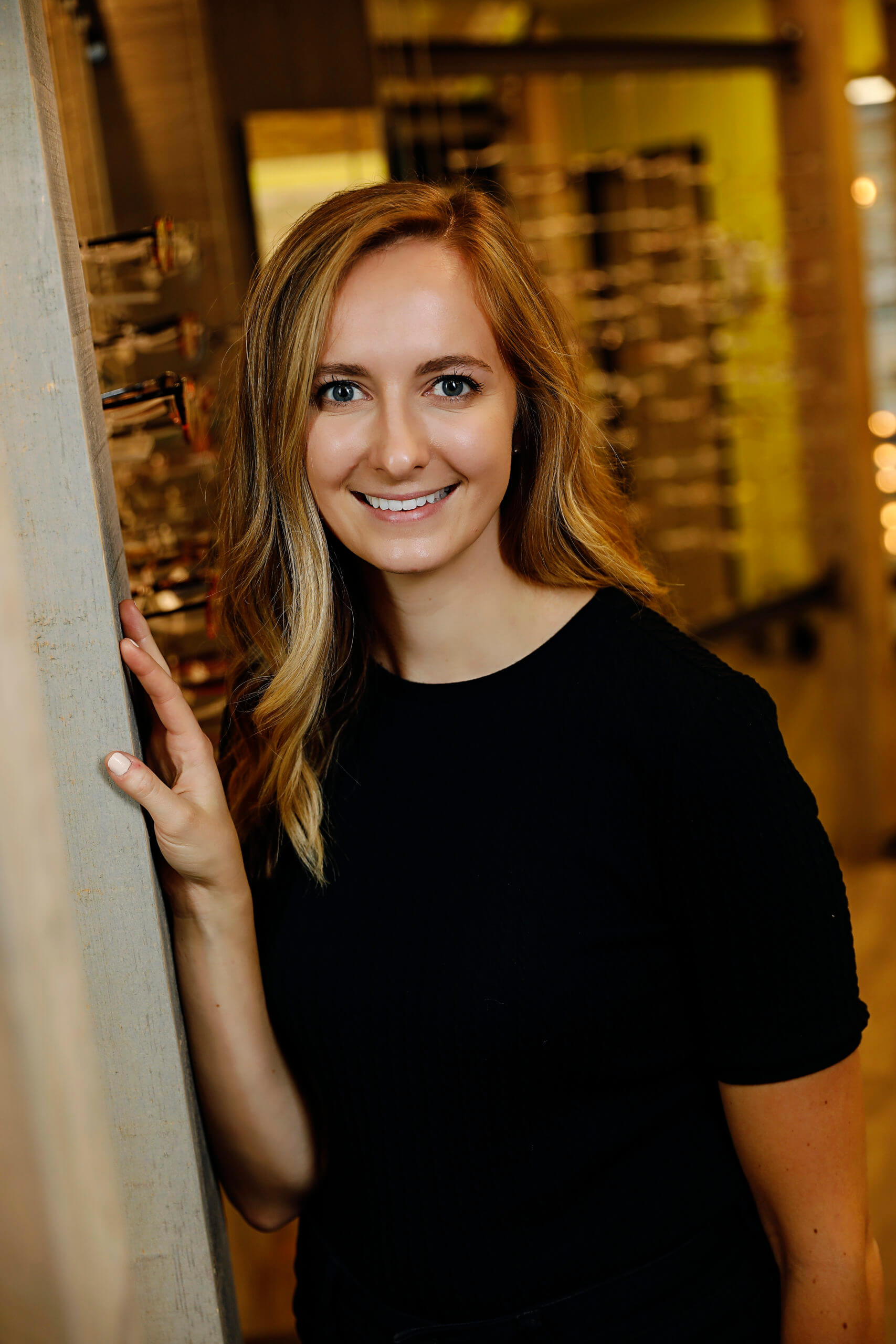 Erin is originally from Guelph and completed her BSc in Microbiology/Immunology and History from Dalhousie University in Halifax. She then decided to pursue a career in Optometry where she earned her MOptom (fully qualified optometrist designation) from Aston University in Birmingham, United Kingdom. She previously worked at Boots Opticians in the UK as an optical assistant and a pre-registration optometrist. Erin is happy to have moved back to her homeland and married her husband Cam last year. She enjoys running and rowing. Having recently moved to Kingston she has discovered her love for Woodenheads pizza! 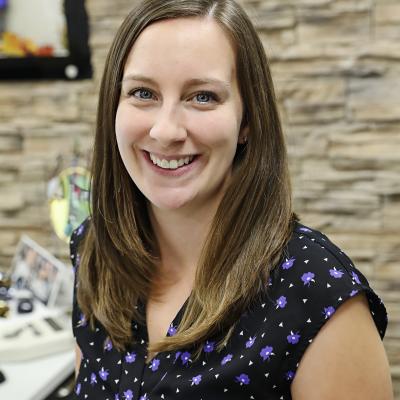 Heather is originally from Nova Scotia but lived in Calgary for almost a decade before moving to Kingston in spring 2018. She has previous eye care experience with roles in pretesting, reception, sales and surgical assisting with Lasik MD. More recently she worked in the food industry where she gained managment experience. Heather earned her Canadian Certified Optometric Assistant designation in summer 2019. Heather is married to Mike and has 2 small boys. Her hobbies are reading and cooking - she loved to try new recipes and is a self-proclaimed food nerd! 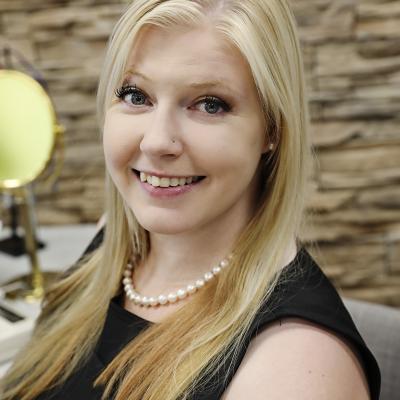 Jasmin joined St. Lawrence Optometry in 2018. She was born in Ottawa from a mother from Montréal and a father from Edmonton. Having learned French from her mother's knee and English from her father's, elle saura vous aider à choisir les produits adaptés à votre mode de vie, dans la langue officielle de votre choix. Jasmin loves calling Kingston home, and has been here since 2009. You will find Jasmin in the frame gallery at both of our offices. Jasmin earned her CCOA designation in 2020.

Jasmin's favourite businesses have been and always will be locally owned and operated. She feels the impact small businesses make on a community is so important, which is why she's such a proud supporter of events held by Jessup Food and Heritage (and absolutely recommends the thistle chips at The Public House) and volunteers with Habitat for Humanity. As an animal lover, Jasmin has an especially clingy kitty named Ninja. Of recent, she is a proud new homeowner too!

Krystyna was born in London, ON but grew up in Kingston.She has worked in the tourism & hospitality industry and more recently in retail. She loves photography and is a homebody - she doesn't mind spending a night watching Netflix with her cats Maylor and Bellatrix! She loves horses and worked four summers on a horse ranch in Picton & still visits them when she can. Krystyna's favourite local businesses are Harper's Burger Bar and Copper Penny.

Lexa was born and raised in Kingston and has a degree in philosophy from Queen's University. Lexa comes to us with experience in sales and is now one of our optical staff. As a petite person Lexa loves the variety of petite frame options we carry, she also likes the socially responsible purpose behind Modo Eyewear brands like Eco. In her spare time Lexa likes to knit, watch Netflix and hang out with her cat Pippa. Fun fact: she is a huge Green Bay Packers fan! As far as her favourite local restaurants, Grecos and Chez Piggy top her list. 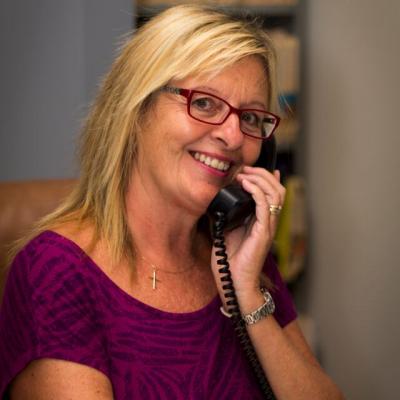 Maureen started working at St. Lawrence Optometry in 1992 and has been seen greeting patients at our front desk ever since. She was born and raised on Wolfe Island.

In her spare time she enjoys the outdoors including swimming in her pool. She also loves spending time with her family; she is happily married to Bill and has a beautiful daughter, great son-in-law and two fantastic grandchildren. You'll see her wearing her favourite frame brands Etnia Barcelona and Nicole Miller. Her favourite local establishments are The Battery Bistro and The Brew Pub.

Morgan is originally from Picton and moved to Kingston a few years ago. Morgan previously worked as an optometric assistant at an Optometry clinic in Picton just prior to attending the optician program at Georgian College. She loves the great outdoors - camping, kayaking and hiking are some of her favourite activities. Fun fact: Morgan loves sharks! A bucket list goal of hers is to go to Mexico and dive with great white sharks. 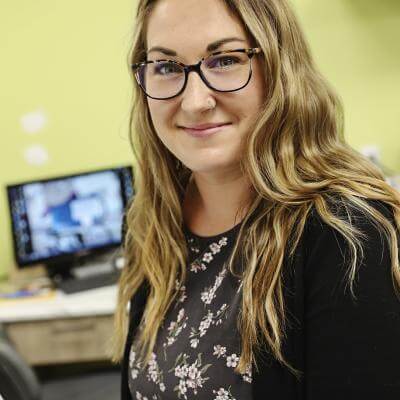 Pam is originally from Mallorytown but has called Kingston home for the last year. She joins our team with a customer service and management background in retail. Her experience is extremely valuable in helping patients choose their next pair of glasses. She earned her designation as a Canadian Certified Optometric Assistant in summer 2019.  In her spare time Pam enjoys baking and outdoor activities like rollerblading, kayaking, and hiking with her dog Ben. She also has two rescue cats: Layla who is from Kingston’s “The Forgotten Ferals” and Will Feral who was found as a stray. One of Pam's favourite local establishments is Fardella’s Classic Bakery. 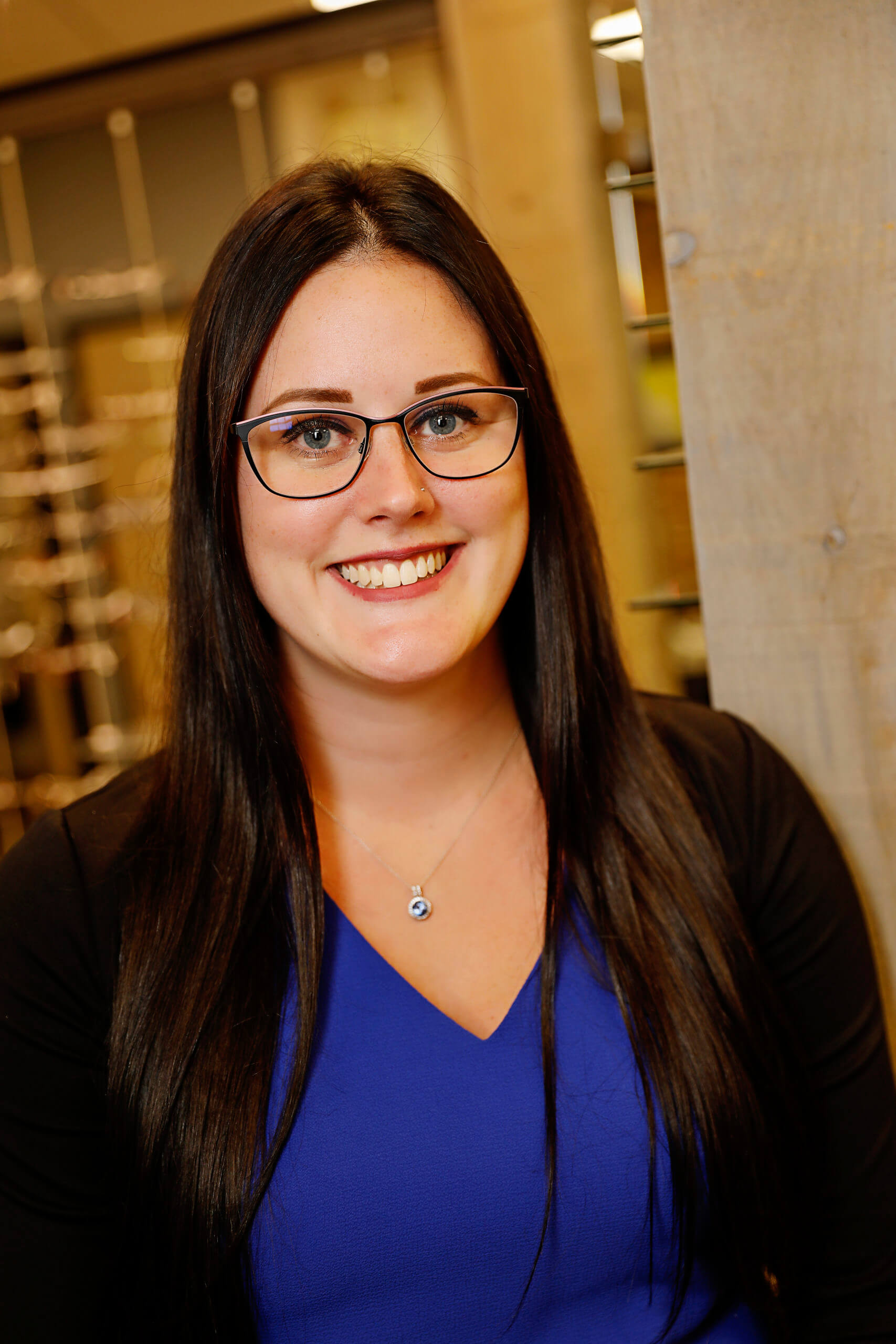 Taylor joins our clinic after gaining experience at Galen Eye Centre working as a technician. You will now find her greeting and pretesting you for your appointment with our Optometrists. She is from Smiths Falls but now lives in Kingston with her boyfriend Erik. As she is a country girl she loves hunting, fishing, four-wheeling and spending time with her family and friends at her parents lake house. Her hobbies include playing baseball and watching hockey (go Leafs go). She also takes every opportunity to go to concerts (her favourite artist right now is Eric Church) and she loves to sing her little heart out. 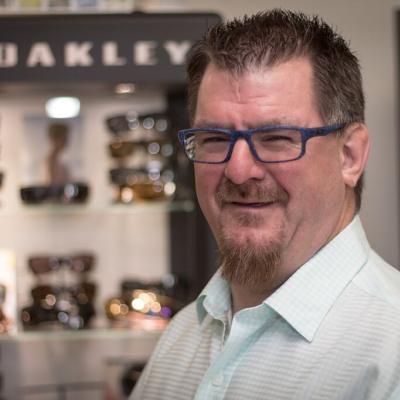 Tim started working at St. Lawrence Optometry in 1992 and has been creating glasses for our patients as our lab technician ever since. Tim is a local lad having grown up in Battersea. In his spare time Tim enjoys riding his motorcycle, golfing and is interested in old cars. He is also an avid blood donor and has done so over 50 times! Tim is married to Nancy and has a son named Kurtis. 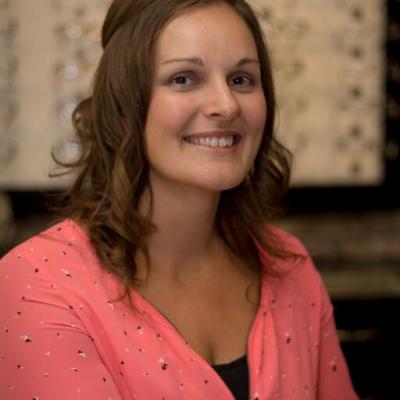 Tracy has always loved working with patients and had previous experience working in health care as a nurses’ aid. She started working at St. Lawrence Optometry in 2006 and is a Canadian Certified Optometric Assistant. She loves helping patients look and feel their best when selecting their new eyewear. Tracy was born and raised in the Kingston area and enjoys many outdoor activities like gardening, boating and fishing. She also enjoys family time with her children Lynnette and Braden and her husband Duane.

Our hours of operation have changed as we are currently seeing patients by appointment only for ALL visits (including glasses adjustments, etc). Please contact our office to book an appointment as needed.

We are continuing to follow health and safety guidelines as set out by the College of Optometrists of Ontario and the Government of Ontario.

Our office protocols have changed considerably due to the COVID-19 pandemic. Please refer to our COVID-19 Building Entry Policy